As the Yankees look to make a run at the playoffs, they’ve still got plenty of questions surrounding their rotation.

It’s becoming clear Andrew Heaney isn’t an answer, as he was knocked around again in his third start since arriving in a trade with the Angels.

He allowed three more homers in the Yankees’ 9-8 loss to the White Sox in the “Field of Dreams” game and has given up eight in 15 innings as a Yankee, to go along with a 9.00 ERA.

Luis Severino is expected to make a final rehab start Friday for Triple-A Scranton/Wilkes-Barre before rejoining the rotation next week.

They’re also due to see the return of Gerrit Cole and Jordan Montgomery, who joined the team in Iowa on Thursday.

The two starters, both still on the COVID injured list, met the team at the airport in Dubuque and bussed over to the game in Dyersville. 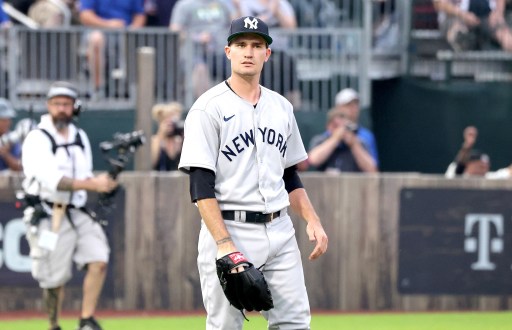 Though Aaron Boone was pleased to have them around, the real test starts Friday, when both are scheduled to throw bullpen sessions in Chicago, where the Yankees will finish their series against the White Sox.

Boone said he’s “pretty optimistic if it goes well, there’s a chance they’re back in the rotation in the early part of next week.”

That would be good news for a team that will have 12 games in 11 days following Friday’s off day, including a makeup game against the Angels on Monday and a doubleheader versus the Red Sox on Tuesday in The Bronx.

Corey Kluber, sidelined since May with a strained shoulder, made his first rehab start for Double-A Somerset Thursday and gave up five runs in 1 ¹/₃ innings.

He struggled with his command and allowed two hits, walked four and hit two batters — to go along with a wild pitch — but he was able to hit 90 mph in the 45-pitch outing.

The Yankees have targeted a possible September return for Kluber, who signed a one-year, $11 million deal with them in the offseason.

Kluber said he was encouraged by how he felt physically and was looking forward to getting back to the Yankees’ rotation, but declined to put a timetable on when he expects that to happen.

Clarke Schmidt was activated off the 60-day IL Wednesday and transferred to SWB after missing much of the season due to a strained elbow suffered during spring training and they also remain without Domingo German, on the IL with right shoulder inflammation.

Joey Gallo’s nightmare start with the Yankees continued Thursday. He walked twice — including in the ninth, when he scored on Giancarlo Stanton’s go-ahead homer — but he’s 2-for-22 with eight walks since his last extra-base hit.

Dating back to before the July 29 trade, Gallo is in a 9-for-77 rut, with four doubles, two home runs and just six RBIs to go along with 14 walks and 38 strikeouts.

After starting in left field on Wednesday, Tyler Wade was back in the lineup at shortstop Thursday. He had two more hits, giving him a pair of hits in each of his past four starts. … Outfielder Estevan Florial was added as the 27th man to the Yankees’ roster for Thursday’s game.

Second baseman Tommy La Stella is remaining in northern California, but is just switching teams and leagues. On Thursday, La Stella of Westwood, NJ, signed a three-year deal worth $18.75 million, with the San Francisco Giants, according to the Associated Press. Source