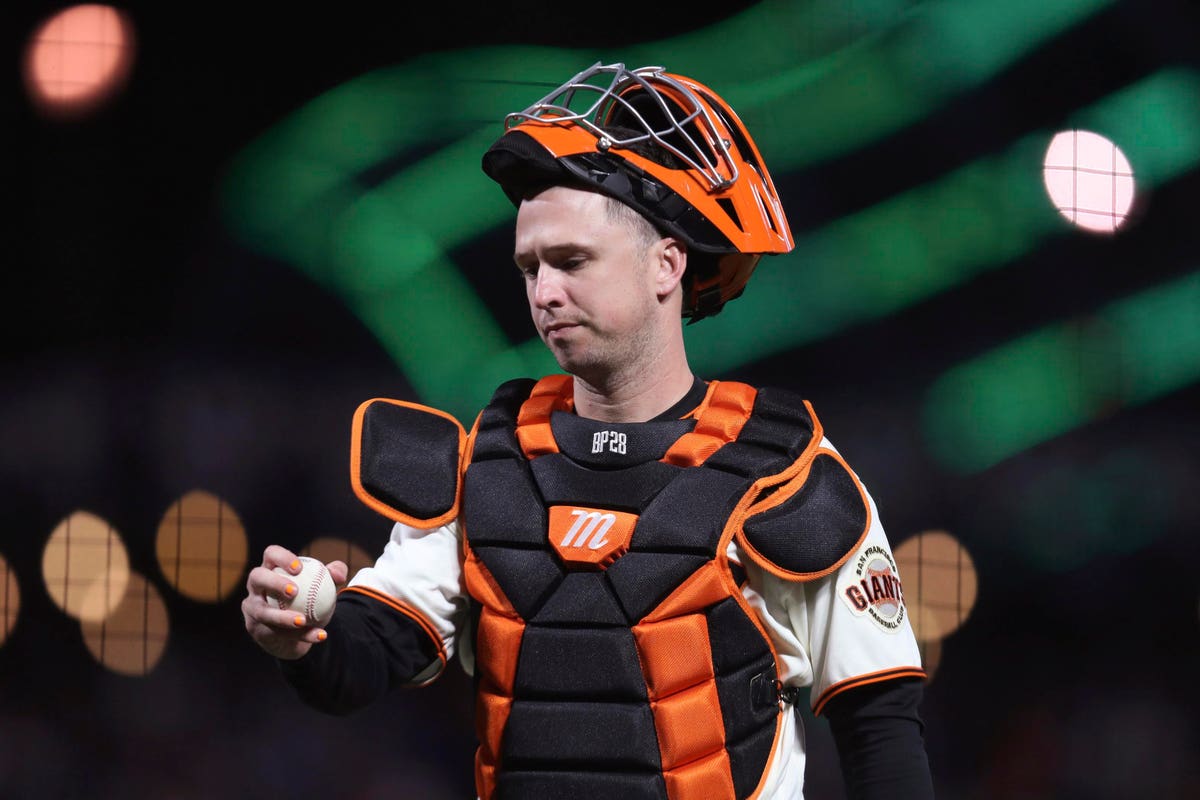 FILE – San Francisco Giants catcher Buster Posey holds the ball during Game 1 of a baseball National … [+] League Division Series against the Los Angeles Dodgers on Oct. 8, 2021, in San Francisco. Posey plans to announce his retirement Thursday, Nov. 4, according to a person with direct knowledge of the decision. The person spoke on condition of anonymity Wednesday because Posey had yet to make his decision public. (AP Photo/Jed Jacobsohn, File)

In a shock to the Major League Baseball world, San Francisco Giants All Star catcher/first baseman Buster Posey has announced his retirement.

Posey was selected by the Giants in the 1st round of the 2008 MLB First Year Player Draft out of Florida State University. He was the No. 5 player taken overall.

MLB had assigned a value of $2.5M to that No. 5 slot in the draft. The Giants signed Posey for a whopping $6.2M, an over-slot transaction that has continued to pay dividends for San Francisco.

Posey has been an instrumental, consequential centerpiece of the Giants since his arrival at the big league level in 2009.

A seven-time All Star, the 34-year-old Posey was among the cornerstones of the Giants unexpected MLB Western Division 2021 Championship. The team finished with a record of 107-55, the best in baseball.

Posey was set to receive a $22M salary for 2022, which would have kicked in with a club controlled option on his contract.

Posey has completed 12 major league seasons, all with the Giants. He sat out the 2020 shortened baseball season when the pandemic changed the entire world and the major league sports landscape.

Many inside baseball as well as dedicated baseball fans feel Posey will be elected to the Hall of Fame. To this writer, that seems all but certain.

Posey, along with seasoned veteran teammates Brandon Crawford, Brandon Belt, and Evan Longoria, provided a quartet of Giants players that set the pace for the rest of the club. Their hard work and perseverance, their professional approach to the game, and their highly unexpected, but outstanding statistical results showed the world of baseball the value of baseball experience.

While Posey has been an All Star catcher, he has also played first base for San Francisco.

This year, however, Posey played all his games behind the plate. He was used as a DH in one game of the 107 games in which he participated.

A leader both on the field and in the clubhouse, Posey won four Silver Slugger awards.

A complete player, In 2016, Posey won a National League Gold Glove for his work behind the plate.

Buster Posey was instrumental in helping the Giants win World Series Championships in 2010, 2012 and 2014.

Those teams featured balanced hitting and pitching, with Posey being a terrific shepherd behind the plate for pitchers such as Matt Cain, Madison Bumgarner, Barry Zito, Tim Lincecum, Tim Hudson. Jake Peavy, Johnny Cueto and Jeff Smardzija, to name several from those great Championship teams.

Posey was the true team leader that kept the group focused and driven to success.

Manager Bruce Bochy used a masterful touch in handling his pitching staffs, and he had the best possible field general behind the plate in Posey.

To this old scout, Posey would make a terrific big league manager.

Posey has the baseball experience, the knowledge, the intelligence, the personality, and the communication skills to lead a big league roster.

Former catchers have proven to be solid baseball managers. They have a vast picture of the game from being deeply involved on both sides of the ball.

Former catchers know the pressures of the pitcher. They know what is needed to navigate an opposing lineup. They have a good sense of pitcher fatigue and injury.

Former catchers also provide insight to the hitting abilities and capabilities of opponents. They know how to best prepare for a given opponent on a given day.

Studying advance scouting reports daily, former catchers know what to look for in the opposition and in their own roster.

Buster Posey spent most of his career watching and learning from the leadership of Bruce Bochy. There could be few better mentors for a future manager than Bochy.

Since 2019, the Giants have been managed by Gabe Kapler. Kapler has received praise for the way he handled the club, and it is likely Posey has watched and studied Kapler at work.

For now, it would appear Posey would like to spend time with his family. He and wife Kristen have four young children. The couple recently adopted twin girls.

SAN FRANCISCO, CALIFORNIA – OCTOBER 08: Buster Posey #28 of the San Francisco Giants reacts after … [+] hitting a two-run home run off Walker Buehler #21 of the Los Angeles Dodgers during the first inning of Game 1 of the National League Division Series at Oracle Park on October 08, 2021 in San Francisco, California. (Photo by Harry How/Getty Images)

All Star Buster Posey surprised the baseball world by announcing his retirement.

Highly likely to become a Hall of Famer, with a career batting average of .302 with 158 career home runs and 729 RBIs in parts of 12 big league seasons, Posey’s bat, his leadership abilities, his defensive prowess and his love and passion for the game will leave the Giants with a huge void.

Catchers Joey Bart and Patrick Bailey were both recent first round draft picks of the Giants. Bart is more advanced in his development than Bailey.

Curt Casali is on the club as a backup catcher.

It is likely the competition to replace Posey behind the plate will be one of the interesting challenges awaiting manager Gabe Kapler.

To this writer, the newly retired Buster Posey would be a terrific big league manager.

After taking time away from the game to recharge his batteries and be with his family, perhaps Posey will return to the game at some point in the future?

It is likely there are plenty of major league dugouts that could find room as their manager for a potential future Hall of Fame, All Star catcher named Buster Posey.
Source