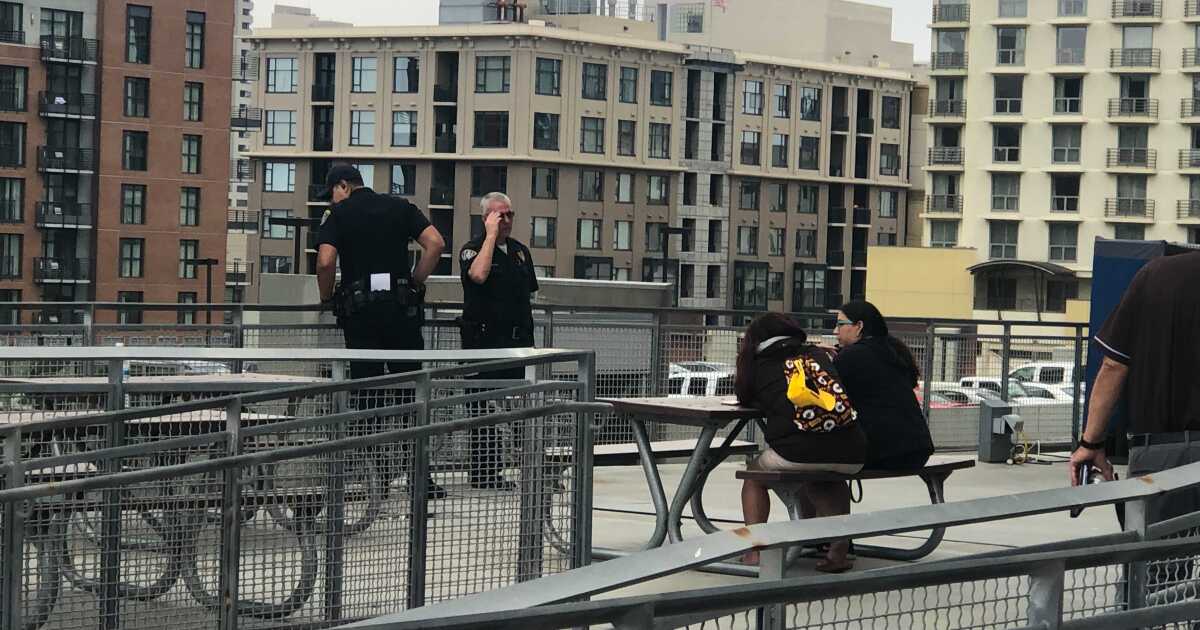 A woman and her 2-year-old son died late Saturday afternoon after they fell from the third level of Petco Park, just as thousands of baseball fans were heading inside for a Padres game, San Diego police said.

The woman, 40, and the boy were pronounced dead at 4:11 p.m., about 20 minutes after police were alerted to the incident, said homicide Lt. Andra Brown.

The pair fell from the third level concourse — the equivalent of six stories high — to the sidewalk below on Tony Gwynn Drive, Brown said. While efforts were made to resuscitate the woman and child, it quickly became apparent that neither had survived the fall, she said.

Their names were not released; both lived in San Diego. The mother and child had been at a dining/concession area on the concourse level prior to the fall, said police Lt. Adam T. Sharki. The child’s father was at the ballpark when the deaths occurred, police reported.

Police said it is too early to know whether the fall was accidental or intentional but noted that the victims’ deaths “appeared to be suspicious.”

Brown said investigators understand that there may have been a number of people in the concourse area who might have more information, which, she said, could potentially “give the family some peace.”

“Our hearts obviously go out to the family, but also to the people who here could potentially be traumatized who saw this,” Brown said. “It’s a horrible, horrible thing. That’s why we’re giving it a very serious look.”

The San Diego Padres said it would not be commenting, deferring to San Diego police for information on the incident and continuing investigation.

“We are deeply saddened by the loss of life at Petco Park last evening,” the team said in a written statement Sunday morning. “Our thoughts and prayers are with the family of those involved. We will continue to refrain from comment on the nature of the incident as it is an ongoing investigation by the San Diego Police Department.”

The incident horrified fans who had come to Petco to cheer on the Padres taking on the Atlanta Braves at the tail end of the baseball season. Posts on social media reflected the sadness and shock of those who had seen what happened, while others in the stands at the 4:15 p.m. game talked about it among themselves.

“I’m just sitting in my seat crying,” one fan tweeted. “Wtf even matters right now on the field knowing what went down here. If anyone is at Petco and needs a hug I’m down. This is beyond devastating.”

Several people who said they witnessed the fall were too shaken to talk.

A man who did not wish to be identified said his wife witnessed the fall. She told him that it appeared a toddler fell from an area with picnic tables, and the woman also fell while trying to grab the child.

A woman who declined to give her name told the Union-Tribune she was walking across the Omni hotel footbridge leading to the ballpark when the incident occurred and didn’t see the fall. She said her husband witnessed a woman and child going over “the side from the third floor of Petco” outside Section 316.

Final 2021 MLB Roster Predictions @JoelReuter projects every team’s 26-man roster one week from Opening Day via Bleacher Report Williams Gets a Fourth Option for 2021: The Mystery Unraveled via Viva El Birdos Buying or Selling MLB Comebacks Will Ohtani, Kluber and other big names bounce back in 2021? Our verdict via Bleacher Report Ben […]

St. Louis Post-Dispatch The move of Goldschmidt and Arenado one spot up each in the order from what had been envisioned may lead to more scoring just because they will always get to bat in the first inning and might get one more at-bat in a particular game. The pressure is on cleanup man Paul […]