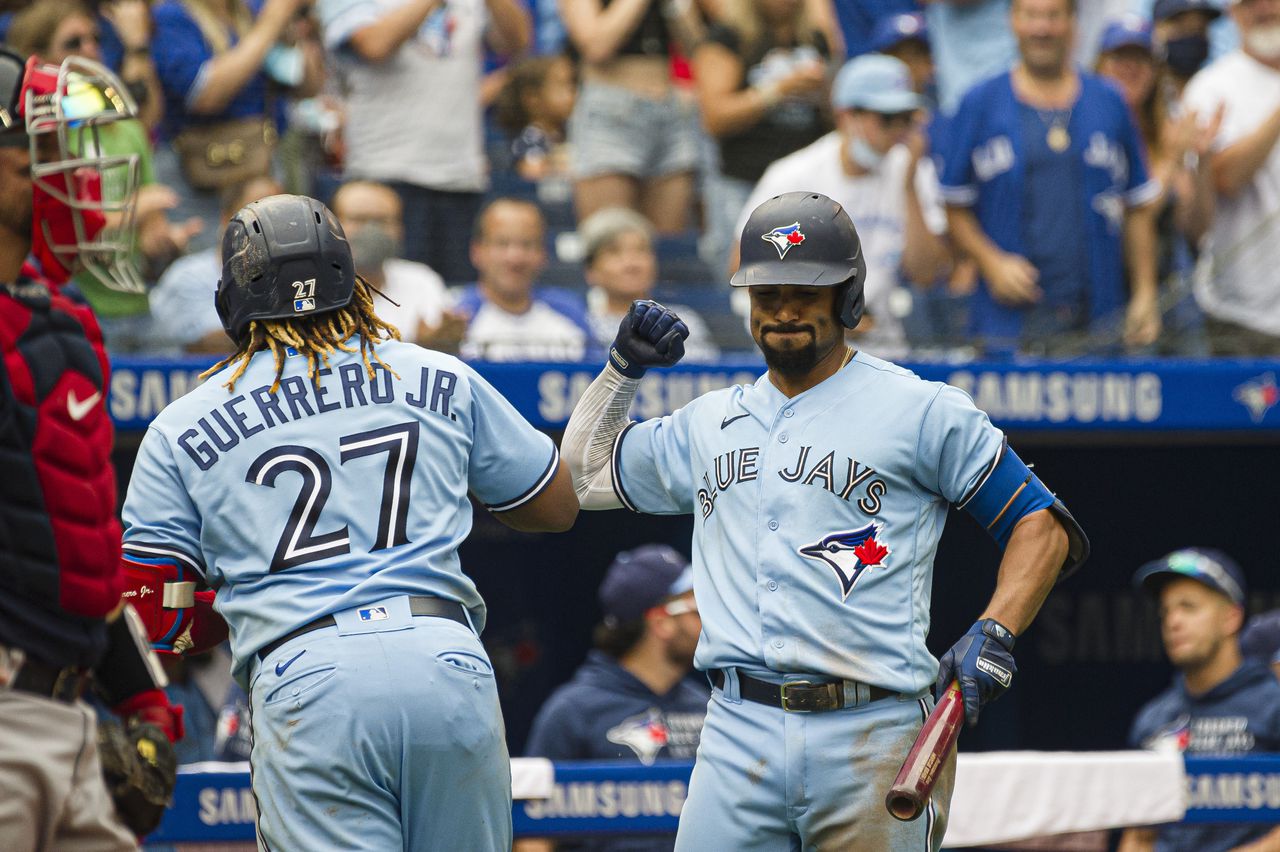 George Springer wiped out all the good things from what had largely been a positive day for the Red Sox with one loud swing in the bottom of the eighth.

Springer crushed a three-run home run off Matt Barnes, his old UConn teammate, to give the Blue Jays a 9-8 win over the Red Sox Sunday at Rogers Centre.

Before that, there had been reasons for optimism in the Boston dugout. Struggling starter Garrett Richards had been good enough through five innings. The Red Sox slumping offense had broken through early and chased Blue Jays’ No. 1 starter Hyun Jin Ryu early. Boston had more hits and runs through four innings Sunday than they had in 16 innings of Saturday’s doubleheader.

But an early 7-2 lead wasn’t safe as the Boston bullpen came apart.

Even though it was only the first inning, the Red Sox appeared to be in trouble out of the gate. After their bats had gone down 1-2-3 in the top of the frame, the Blue Jays took a 1-0 lead and were threatening for more with two on and two out in the bottom against Richards, who’d struggled against everybody lately and especially Toronto. But Lourdes Gurriel grounded out to limit the damage.

The Red Sox bats came to life after that. After Rafael Devers led off with a single, J.D. Martinez, who’d been cleared from COVID-19 protocols, doubled to left. Devers scored to tie the game and Martinez scooted into third when Gurriel misplayed the ball in left. Kevin Plawecki gave the Red Sox an early lead with a single to left and moved to second on Bobby Dalbec’s single. Kiké Hernandez pushed the edge to 3-1 with an RBI single.

Richards was a different pitcher in the second, breezing through a 1-2-3 inning. After Boston stretched the lead to 4-1, Richards gave up an unearned run in the third.

But the Boston bats picked him up again, this time adding three runs with two outs in the fourth. After they chased Ryu, Martinez drove in two with a bases-loaded single to left to make it 6-2. Devers’ decision to try to score looked ill-advised when he rounded third on Kevin Plawecki’s single to left. But Devers’ great slide combined with a bad tag by Reese McGuire allowed him to score run No. 7.

Guerrero cut the Red Sox lead to 7-4 with a two-run home run in the bottom of the fifth, but Bobby Dalbec drove home Martinez in the top of the sixth to put the visitors’ edge back to 8-4.

Toronto scored twice in a wild seventh inning. Hirokazu Sawamura threw seven straight balls including two wild pitches before leaving with an injury. Adam Ottavino replaced him and threw a ball to finish Guerrero’s walk. After Springer scored on Marcus Semien’s fly out, Guerrero stole second and scored on Teoscar Hernandez’s RBI single to get to make it 8-6.

Hernandez moved to second on Ottavino’s errant pickoff throw, but he ran himself into an out trying to go to third on Corey Dickerson’s hard bouncer to short. Bogaerts alertly threw him out at third. Dickerson stole second trying to keep the pressure on, but Ottavino picked him off second to end the inning.

With two out in the eighth, Alex Cora went to Barnes, who pitched in both ends of Saturday’s doubleheader. But he walked McGuire and left a 2-2 pitch over the plate to Springer, who crushed it.