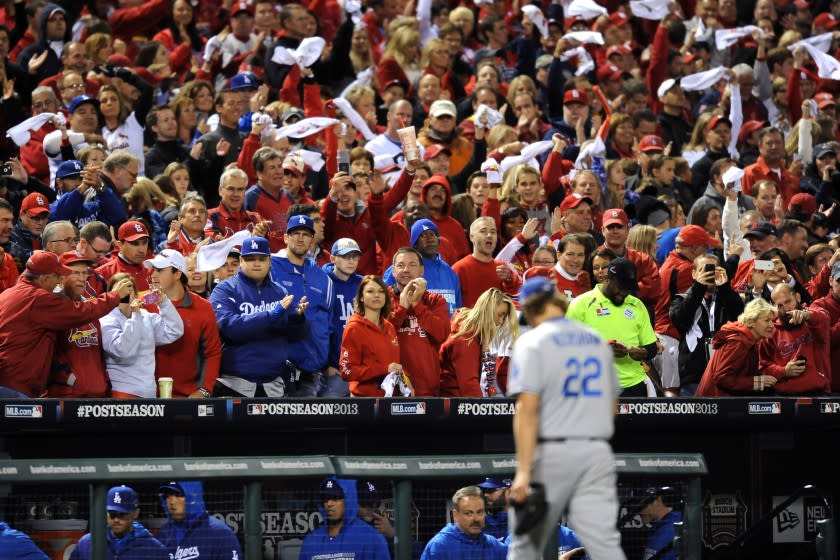 Dodgers pitcher Clayton Kershaw leaves Game 6 of the 2013 NLCS against the St. Louis Cardinals. He gave up three runs in the third and four more in the fifth, and the Cardinals advanced to the World Series after a 9-0 win. (Wally Skalij / Los Angeles Times)

The Los Angeles Dodgers and St. Louis Cardinals have faced each other in the postseason five times since the start of the league playoffs in 1969, and history has not been kind to the Dodgers, who have lost four of those meetings, most recently a 3-1 defeat in the 2014 National League Division Series.

Here’s the story of the five previous October showdowns:

Dodgers pitcher Orel Hershiser slides across home plate in the second inning of Game 2 of the NLCS next to teammate Bill Madlock and Cardinals catcher is Darrell Porter. (Associated Press)

Game 1 (at Dodgers 4. St. Louis 1): The Dodgers knock Cardinals starter John Tudor out of the game in the sixth inning, with the biggest blow being Steve Sax‘s double. Fernando Valenzuela gives up one run in 6.1 innings and Tom Niedenfuer gets an eight-out save.

Game 2 (at Dodgers 8, St. Louis 2): Bill Madlock and Greg Brock each drive in two runs and Orel Hershiser goes all the way for the Dodgers in victory.

Game 3 (at St. Louis 4, Dodgers 2): Cardinals score all their runs off of Bob Welch in the first two innings.

Game 4 (at St. Louis 12, Dodgers 2): The Cardinals score nine runs off Jerry Reuss and Rick Honeycutt in the second inning and Tito Landrum and Terry Pendleton each have three RBIs in the game.

Game 2 (at St. Louis 8, Dodgers 3): Jeff Weaver gives up six runs and the Cardinals cruise to an easy win.

Game 3 (at Dodgers 4, St. Louis 0): Jose Lima pitches a five-hitter as the Dodgers win their first playoff game since 1988.

Game 4 (St. Louis 6, at Dodgers 2): Pujols has the key blow, a three-run home run in the top of the fifth off of Wilson Alvarez.

Dodgers left fielder Manny Ramirez runs after getting a hit during Game 3 in the 2009 NLDS. (Darron Cummings / Associated Press)

Game 1 (at Dodgers 5, St. Louis 3): Matt Kemp hits a two-run homer in the first and the Dodgers also get RBIs from Rafael Furcal, Casey Blake and Russell Martin.

Game 2 (at Dodgers 3, St. Louis 2): Dodgers rallied with two runs in the ninth inning when left fielder Matt Holliday lost a two-out liner hit by James Loney in the lights and dropped the ball for an error.

Dodgers’ Mark Ellis walks away after striking out to end Game 6 of the 2013 NLCS against the St. Louis Cardinals. (David J. Phillip / Associated Press)

Game 1 (at St. Louis 3, Dodgers 2, 13 inn.): Chris Withrow gives up a single and a walk in the bottom of the 13th, giving way to Kenley Jansen, who gives up a game-winning single by Carlos Beltran. This is the game where Cardinals starter Joe Kelly hit Hanley Ramirez in the ribs with a pitch, injuring Ramirez and curtailing his effectiveness (he went two for 15) the rest of the series.

Game 2 (at St. Louis 1, Dodgers 0): The Cardinals score an unearned run in the fifth inning off of Clayton Kershaw and five Cardinal pitchers make it hold up.

Game 3 (at Dodgers 3, St. Louis 0): The Dodgers get RBIs from Adrian Gonzalez, Yasiel Puig and Hanley Ramirez while Hyun-jin Ryu (seven innings), Brian Wilson (one) and Jansen (one) shut out the Cardinals.

Game 4 (St. Louis 4, at Dodgers 2): The Cardinals score three runs in the top of the fourth off Ricky Nolasco, with the key blow a two-run homer by Matt Holliday.

Game 5 (at Dodgers 6, St. Louis 4): The Dodgers score four times in five innings against Kelly, with key homers by Gonzalez and Carl Crawford. Jansen gives up two runs in the ninth to make the game close.

Game 6 (at St. Louis 9, Dodgers 0): This is the game that advanced the persistent narrative that Kershaw was an ineffective postseason pitcher. He gave up three runs in the third and four more in the fifth as the Cardinals advanced to the World Series in a laugher.

Game 1 (St. Louis 10, at Dodgers 9): The tone for the series was set in Game 1. Leading, 6-1, Clayton Kershaw couldn’t get out of the seventh inning as the Cardinals scored eight times.

Game 2 (at Dodgers 3, St. Louis 2): After the Cardinals tied the score in the top of the eighth off of J.P. Howell, Matt Kemp led off the bottom of the inning with a home run off of Pat Neshek. Kenley Jansen got the final three outs for the save.

Jazz at Lakers, who wins? JazzLakers Warriors at Celtics, who wins? WarriorsCeltics Nets at Heat, who wins? NetsHeat Dodgers at Padres, who wins Saturday? DodgersPadres How many MLB players will have multi-HR games on Sunday? 2 or less3 or more Capitals at Bruins, who wins? CapitalsBruins Islanders at Flyers, who wins? IslandersFlyers Leeds vs. Liverpool, […]