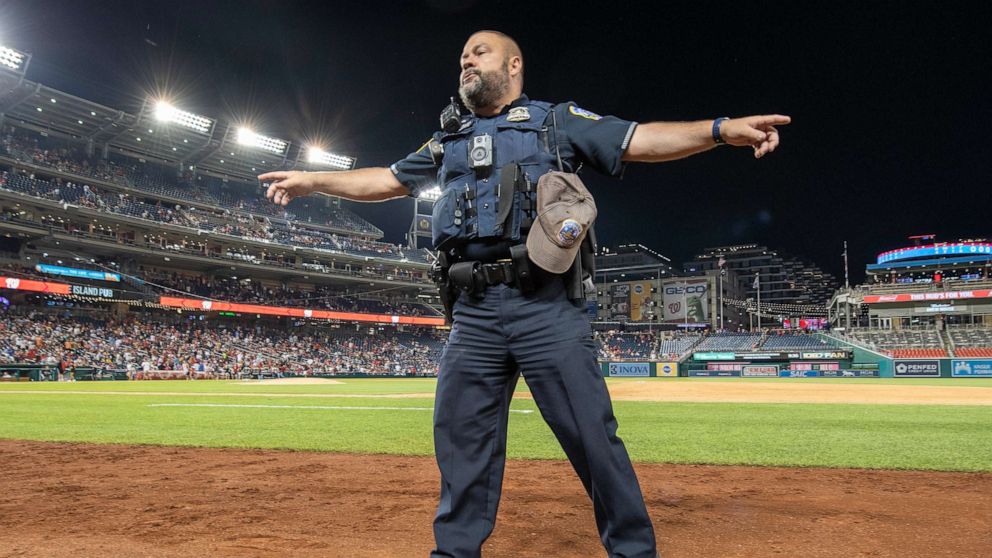 A gray Toyota with a missing hubcap is being sought by police in a triple shooting that erupted outside Nationals Park in Washington, D.C., that prompted an abrupt halt to Saturday night’s baseball game and sparked panic among fans.

The Washington D.C. Metropolitan Police Department released photos of the car Sunday on Twitter and described it in a statement as “the suspect vehicle.”

During a late-night news conference Saturday, police said the shooting was an isolated incident and believed to be a shootout between two vehicles.

The other vehicle suspected to have been involved was recovered shortly after the shooting, authorities said.

“While MPD’s investigation is ongoing, it appears the incident involved a dispute between individuals in two vehicles. MPD does not believe the Washington Nationals, the ballpark or fans were the target,” according to a joint statement from D.C. Mayor Muriel Bowser and Nationals owner Mark Lerner.

As of Sunday afternoon, no arrests had been made.

DC Metropolitan Police Department has released this image of a vehicle wanted in connection with a shooting at Nationals Park, July 17, 2021.

Police asked the public for help in identifying the occupants of the Toyota Corolla they said was captured on video by nearby surveillance cameras. They said the car was displaying a temporary Virginia tag, had dark-tinted windows and was missing a hubcap on the rear driver’s side wheel.

The Nationals confirmed the shooting occurred outside the Third Base Gate at Nationals Park during Saturday’s game between the Nationals and the San Diego Padres. After initially telling fans to stay in their seats due to an “incident” outside, they were then told to exit the stadium through the Centerfield or Right Field gates.

“We stand together against senseless acts of gun violence in the city we love. Gun violence — no matter where it occurs in our city — is unacceptable and will not be tolerated,” the joint statement said Sunday. ” …“We appreciate the tremendous cooperation of the fans at Saturday night’s game who did all that was asked of them under very stressful circumstances, and the police and the fire emergency medical personnel who responded.

The game was in the bottom of the sixth inning when fans heard loud pops outside the park. The game was halted as fans were seen heading for the concourse and some even exited the stands onto the field and into the dugouts.

Police said the shooting occurred about 9:30 p.m. and that D.C. Metropolitan Police officers were at the stadium, heard the gunshots and found a woman, who was attending the game, wounded outside the stadium.

“While investigating, members located an adult female, conscious and breathing, suffering from a gunshot wound,” police said in a statement on Sunday, adding that the woman was taken to hospital for treatment of non-life-threatening injuries.

She is expected to be OK, police said. Two others believed to be involved in the shooting are being questioned at the hospital.

A short time later, police were notified of two additional adult male victims who were seeking treatment at a local hospital for non-life-threatening gunshot wounds. They were both being questioned at the hospital.

Spectators stand in the visiting team dugout during a stoppage in play due to an incident near the ballpark in the sixth inning of a baseball game between the Washington Nationals and the San Diego Padres, Saturday, July 17, 2021, in Washington.

The Nationals were losing, 8-4, at the time the game was stopped.

The team said it will pick up the game on Sunday, where it left off with a nine-inning game. The game will be part of a doubleheader.

A policeman directs fans after apparent gunshots were heard outside of Nationals Park during a game between the Washington Nationals and the San Diego Padres.

In a separate shooting, a 6-year-old child was killed in a shooting in Washington, D.C., on Friday night that left five adults injured. Officials announced at a news conference that a $60,000 reward for information into the shooting of the girl, identified as Nyiah Courtney. Homicides have been on the rise in the city since 2017, according to city crime data.

Filed under: Anthony Rendon fouled a ball off his left knee, Shohei Ohtani was scratched from his pitching start but hit a home run and a double, José Quintana got rocked again, and Mike Mayers was placed on the injured list in the Angels loss to the Rays on Monday night. Source