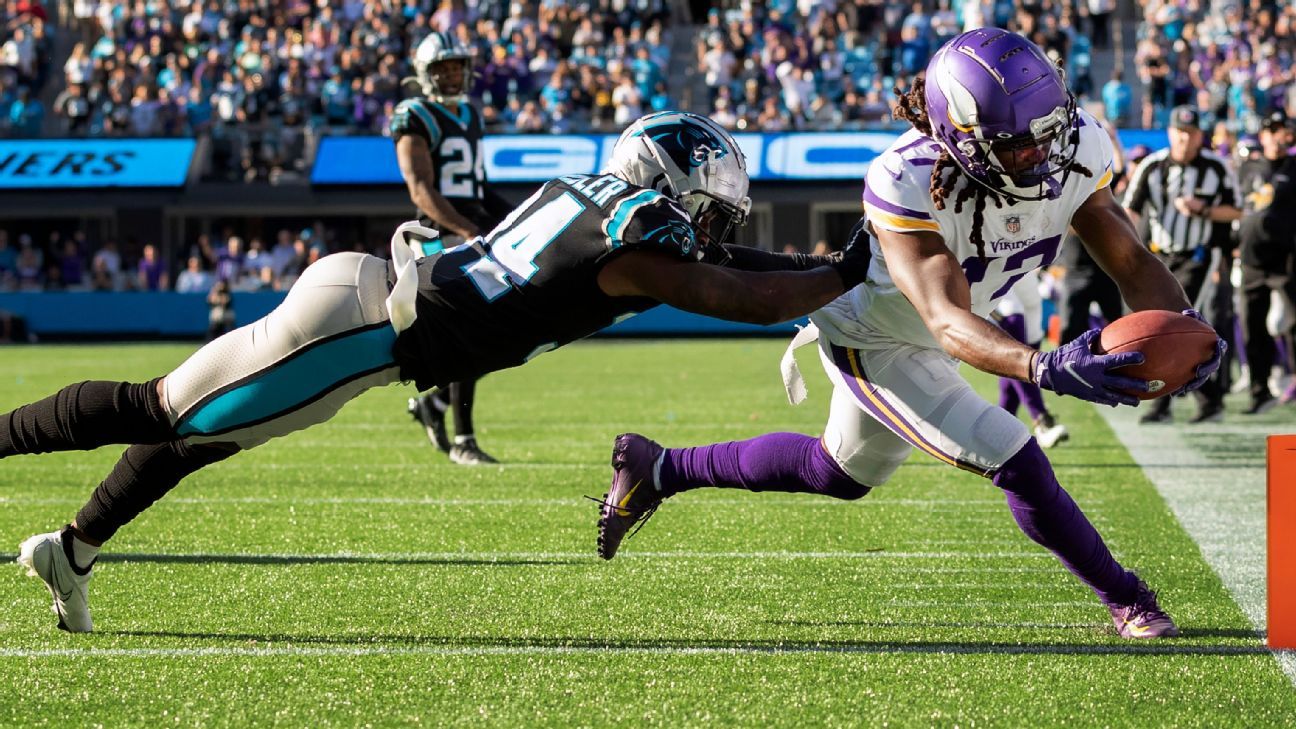 CHARLOTTE, N.C. – Exiting his news conference following Sunday’s 34-28 overtime win over the Carolina Panthers, the fourth time in six weeks that the Minnesota Vikings’ fate had been decided on the game’s final drive, coach Mike Zimmer didn’t hide his exhaustion.

“I’m worn out,” Zimmer said to no one in particular.

Not long before second-year receiver K.J. Osborn hauled in the game-winning touchdown, Zimmer was hunched over on the sideline, head down with his hands on his knees and heart in his throat waiting for the result of Greg Joseph’s field goal attempt with six seconds left in regulation.

Like the previous week’s win over Detroit, the Vikings were hoping their kicker would lift them into the win column after blowing another double-digit lead, this time an 11-point advantage with five minutes remaining. But Joseph’s 47-yarder went wide right and sent the Vikings to overtime.

K.J. Osborn’s overtime touchdown lifted the Vikings to another last-second victory, but as Minnesota enters its bye week, it will focus on putting a full game together and not relying on late heroics. Carlos Gonzalez/Star Tribune via AP

“We are what we are,” Zimmer said. “But I like the resiliency of this team. They fight.

Minnesota is 3-3 entering a Week 7 bye. The Vikings have won three of their last four games and their three losses are by a combined 11 points. Style points be damned in the NFL, where parity makes wins difficult to come by for any team, but the way these games have gone for the Vikings is particularly taxing.

“I’m spent,” quarterback Kirk Cousins said. “It’s an absolute grind every Sunday, and it takes everything I got, and I’ve been on the other side of those losses during my career the last 10 years. It’s rewarding when you know how the other side feels, too, and to really enjoy it when you do make the play and win.”

The nature of the NFL makes it difficult to figure out most teams this early. Teams like the Cleveland Browns, who beat the Vikings on Oct. 3 and have an identical record, are often subjected to the same ups and downs as everyone else, but it’s hard to figure out where the Vikings fall on the good-bad spectrum.

Minnesota put up 571 yards of offense, which was the third-highest single-game output in franchise history, but it let Sam Darnold, who the Vikings had dominated for most of the game, orchestrate a 96-yard drive in 1:27 to force overtime.

The Vikings need this early season bye to figure out their offensive inconsistencies, though it’s promising that they notched their first second-half touchdown since Week 1. They need to diagnose why they’re still struggling to stop the run, allowing an average of 5.1 yards per rush at Carolina, after they’ve seemed to remedy their other defensive issues of late.

And while Minnesota has proven resilient, the Vikings biggest issue is they lack a killer instinct, from the way games have been called to the way plays have been executed throughout the first six weeks.

“We have to be hungry to learn and hungry to correct. Not be content with a win in the sense that we have to be better and make adjustments and have a sense of urgency.”

A sense of urgency means putting teams away before the last possible moment. It means taking chances instead of playing it safe, like when Minnesota kicked two 25-yard field goals in the first half instead of going for it on fourth-and-short from inside Carolina’s 6 and 7-yard lines, respectively.

Vikings coach Mike Zimmer was happy to be on the winning side of his postgame coaches’ handshake Sunday, but he said he felt ‘worn out’ after another game decided in the final seconds. Bob Donnan-USA TODAY Sports

Cousins’ own killer mentality has come through on multiple drives this season when he’s put his team in position to win. He demonstrated that again with a 9-play, 75-yard overtime drive that bailed his team out after another late-game collapse. It was his ninth game as a Viking with 300 passing yards, three touchdowns and no interceptions.

Minnesota’s defense was great for the first 55 minutes Sunday and then it melted down. The Vikings had been blitzing all day, but then decided to play coverage after three incomplete passes from Darnold. Linebacker Eric Kendricks wasn’t anticipating Panthers tight end Ian Thomas to run a go route on fourth-and-10, but that’s exactly what happened en route to Carolina tying the game.

“I’m thinking, ‘Let’s not give up a big play right here,’” Zimmer said. “We just didn’t do a good job in coverage on that one particular play. I’ve got to do a better job of teaching them.”

Instead of putting themselves in a 2-4 hole, the Vikings are squarely in the NFC playoff picture at 3-3, but they can’t continue to let their opponents hang around when they have a window to close them out. Finding that aggressive edge will determine how the Vikings fare in a post-bye stretch that starts out with Dallas at home before trips to face the Ravens, Chargers, 49ers and a division game against Green Bay.

“I’m exhausted with it,” Kendricks said. “I’m ready to put a full game together, but it’s part of the struggle. You’ve got to love the struggle a little bit.”

Astros starter Framber Valdez could return to the team at some point in June, manager Dusty Baker told reporters (including Brian McTaggart of MLB.com) this afternoon. That’s the first timeline the organization has defined since the left-hander fractured his left ring finger on a comebacker during Spring Training. In the initial aftermath of the injury, it […]