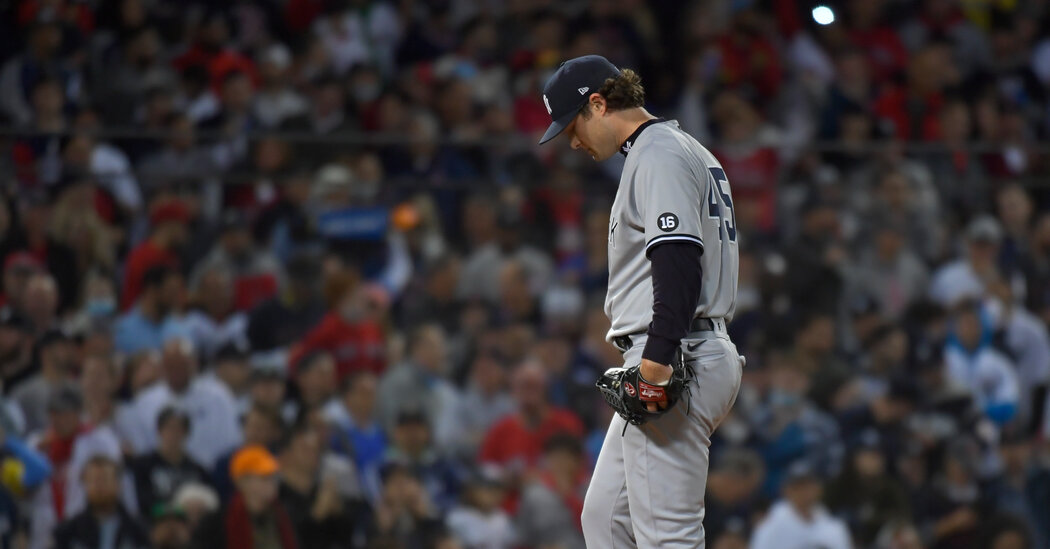 BOSTON — Concluding a 162-game, six-month regular season with one night is both nerve wracking and cruel. But if a team is going to have its year decided by a winner-take-takes-all contest, the best antidote is having its ace, one of the elite starting pitchers in baseball, on the mound.

The Yankees had that in Gerrit Cole for the 2021 American League wild-card game on Tuesday in hostile Fenway Park against their longtime archrival. The Boston Red Sox countered with their best starting pitcher this season, Nathan Eovaldi, an All-Star like Cole.

In a meeting of imperfect and streaky 92-win teams, the Red Sox and Eovaldi thumped the Yankees and Cole, 6-2. Tuesday was the fifth time these storied rivals had played in an elimination game in the playoffs and the Red Sox have now won the past three.

“I know a lot of people doubted us and they doubted him and all that,” Red Sox Manager Alex Cora said of Eovaldi. He added: “He was amazing.”

The Red Sox now advance to face the Tampa Bay Rays in an A.L. division series that begins on Thursday. It will be a difficult task: The Rays, the defending A.L. champions, won 100 games this season, finishing eight games ahead of both the Red Sox and the Yankees in the A.L. East.

Despite equal regular-season records, the Red Sox earned the right to host wild-card game because they won the season series with the Yankees, 10-9. And on Tuesday night, the Red Sox, who had been the best hitting team at home in baseball this season, showed how much it helped to be at in Boston in front of a sold-out crowd of 38,324.

“It was really loud, especially the early innings,” Red Sox shortstop Xander Bogaerts said. “Especially when the Yankees were hitting in that first inning, it got really loud. It was a huge advantage for us.”

As he pitched, Cole was repeatedly showered with chants of “Geeeeerrit! Geeeeerrit!” And as he felt them in the first inning, Cole surrendered the game’s first critical blow: a two-run 427-foot blast to center field by Bogaerts.

Two innings later, the Red Sox again took advantage of Cole’s continued wayward command. He turned to his bread and butter pitch, a high fastball, in an attempt to strike out Kyle Schwarber but it didn’t work. Schwarber clobbered it over the right field fence for a solo blast.

“The crowd was electric there, and it definitely made me get to a point where I didn’t really know what I was doing running the bases,” Schwarber said.

A single and walk later, Yankees Manager Aaron Boone emerged from the dugout to remove Cole from the game. It was a stunning exit for Cole, normally a stout postseason pitcher whom the Yankees signed to a $324 million contract before the 2020 season for moments like these. Cole trudged toward the Yankees dugout with no outs in the third inning with his head down as Red Sox fans cheerfully waved goodbye. It was, by far, the shortest postseason start of Cole’s career.

“Sick to my stomach,” Cole said after the game, adding later, “This is the worst feeling in the world, and it happens to 29 teams every year, going home early and not achieving your ultimate goal.”

Much like the Yankees, Cole slumped to the finish line. He missed two weeks in August after contracting the coronavirus despite being vaccinated. He also suffered a hamstring injury in early September, returning after just a week, but insisted heading into the wild-card game that his leg was fine. In September, he had an unsightly 5.13 earned run average.

Cole refused to point to any of those factors — or any, really — for his subpar performance down the stretch or on Tuesday. Eovaldi, on the other hand, struggled against the Yankees in the final week of the season, coughing up seven runs on Sept. 24, but he and the Red Sox identified the problem with his pitching and corrected it.

“We had the right guy on the mound today,” Cora said.

Using a mix of high-90s fastballs and wicked breaking balls, Eovaldi flummoxed the Yankees for five and a third innings. At one point, he retired 11 straight. But as Eovaldi was scheduled to face the Yankees’ lineup for a third time, starting in the sixth inning, Cora took no chances and turned the game over to the bullpen shortly after Eovaldi had surrendered a solo home run to Anthony Rizzo.

“It’s definitely frustrating but obviously I understand the situation and everything,” said Eovaldi, a World Series hero for the Red Sox in 2018 who was facing the Yankees for the seventh time this season.

Added Cora: “They know him and he was great. When I went to the mound, he gave me this look, like, ‘What are you doing?’”

Cora’s move worked but it injected tension into the game. Facing his first batter, Red Sox reliever Ryan Brasier coughed up a missile of a hit to Yankees slugger Giancarlo Stanton. But the ball smashed off the Green Monster in left-center field, missing a game-tying two-run home by a few feet, which left Stanton fuming.

The Yankees then squandered the opportunity entirely. On Stanton’s blast, third base coach Phil Nevin waved home star outfielder Aaron Judge against a Red Sox outfield defense that excelled at cutting down base runners. The relay throws from Enrique Hernandez to Bogaerts to catcher Kevin Plawecki were perfect, and Judge was easily nabbed at home plate.

“That was one of the biggest moments in the game,” Bogaerts said.

The Red Sox then chipped away at the Yankees’ revolving door of relievers. Left fielder Alex Verdugo drove in Bogaerts with a double in the sixth inning. In the next frame, Verdugo drove in two more runs with a single to give the Red Sox a 6-1 lead, enough cushion to withstand a ninth-inning solo blast by Stanton.

Inconsistent offensively all year, the Yankees led the major leagues in walks during the regular season. But on Tuesday, they drew none. Instead, they struck out 11 times. It was one of several confounding aspects about the Yankees this season.

Many difficult decisions await them this winter. What to do with catcher Gary Sanchez, who struggled in several ways and has one year left before free agency? What to do with Gleyber Torres, who sputtered mightily at the plate and at shortstop before being moved to second base in September?

Can they keep Judge, who is also a free agent after the 2022 season? “I want to be a Yankee for life,” he said after Tuesday’s loss.

Will Boone, who is unsigned for 2022, be back? He said, “I walk out of here tonight proud of what a lot people have done since I have been here. Whatever does happen, I am at peace with it, and I know I can hold my head high.”

Most important, though: How does the Yankees front office improve a roster that was both talented and inconsistent, and hasn’t won a World Series since 2009?

“If it was something that was obvious or that I knew, we would have put a stop to it or made an adjustment, whether it be in May or July or August,” said outfielder Brett Gardner, the longest tenured player on the Yankee who was still in his uniform more than an hour after the game ended.

After the final out, the Yankees walked off the field as the Red Sox jumped with glee. One rival was sent home — again — while the other continues on.

<h2>2020 MLB Odds</h2> <p>The 2020 MLB season has been released with a shortened 60 game schedule beginning on July 23rd. This MLB Vegas Odds page will be updated daily with money line betting odds on each game, including baseball odds from Las Vegas sportsbooks such as Westgate Superbook, Circa Sports, William Hill, and MGM. For […]